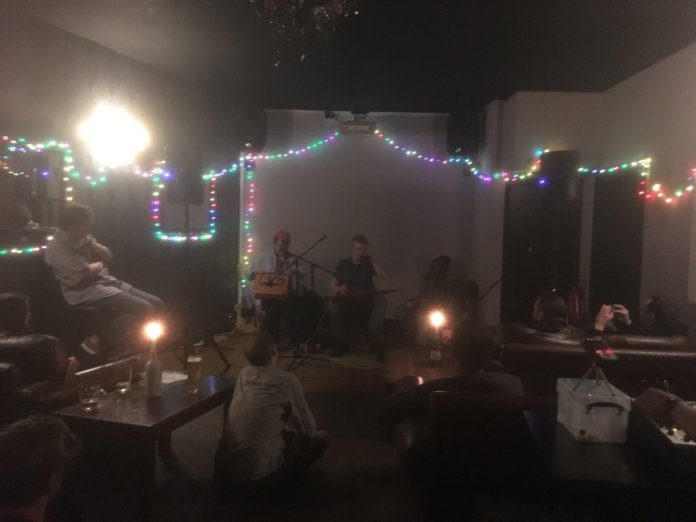 I want to write something quickly this morning, before anyone else gets up, about the show I saw in Cambridge last night. Jake Xerxes Fussell and Daniel Bachman have been touring the UK these last few days, playing to reverent crowds and, I hear, at the Caught By The River show in Bristol, breaking out some strong moves to Funkadelic, in Fussell’s case at least.

This last detail might sound incongruous, given the expectations of two musicians whose adherence to the precepts, as per billing at Cambridge Blue Moon, of Primitive American guitar music, would make them likely to be stern avant-folklorists. It’s a tradition that seems to have privileged thorniness from John Fahey onwards.

What’s interesting about Fussell and Bachman’s sets, however, is how this is fundamentally social music; that even though the country-blues may have travelled thousands of miles, actually and metaphorically, into spaces of more formal culture, it retains a rare spirit of companionability. You can hear it when Bachman unself-consciously digs into a songbook nearly a century old, raiding the Paramount label catalogue for William Moore’s “Old Country Rock”, or essaying a lovely Lemuel Turner song, “Beautiful Eyes Of Virginia”, that he first heard, he told Aquarium Drunkard, at the house of the legendary blues archivist, Joe Bussard.

It’s especially striking in Fussell’s performance, as he draws neglected yarns from the southern states (he’s from the Georgia-Alabama border country, but now based in Durham, North Carolina) and beyond and brings them alive to a new audience. What emerges is a set that can encompass vintage pop jazz – Duke Ellington’s “Jump For Joy” being hardly the most rustic of picks – alongside the likes of “Raggy Levy”, located in Alan Lomax’s recordings of Georgia Sea Island Singers.

Over a frequently terrifying few months of 2017, I’ve found Fussell’s second album, What In The Natural World, to be an unostentatious consolation of sorts, and that quality comes across even more potently when he steps up in this small and comfortable room. Fussell plays electric, and on What In The Natural World he’s backed by a skilled band including Nathan Bowles on drums, and Nathan Salsburg, among others. Here, though, Fussell’s own playing has such an inherently percussive momentum that it begins to seem odd he would ever need rhythm backup. Unlike more uptight and overtly scholarly contemporaries, Fussell carries his academic chops lightly. His tunes swing, and his picking is intricate but easygoing.

It all makes most sense in the outstanding “Have You Ever Seen Peaches Growing on a Sweet Potato Vine?”, which we featured on our Uncut CD a while back, and which has a kind of ambling cyclical momentum that could just about be described as infinite country blues. It’s one of those occasions where vernacular music becomes transcendent without appearing to try too hard at being deep, and only a broken string seems to stop it rolling round and round indefinitely.

That and Daniel Bachman’s set, of course (the pair have been alternating headline slots from night to night). Bachman’s reputation is maybe more hardcore and introverted than Fussell’s, and the Virginian certainly has a longer and more complicated discography – though the recent self-titled set on Three-Lobed is as good a point of entry as any. Bachman is often talked up, perhaps not always helpfully, as the most obvious successor to Jack Rose, and you can understand that in the way his music folds raga into the blues, how there are moments of profound spiritual intensity, even as he’s picking out a rag on his lap guitar.

But again there’s a sense, much more pronounced than on his still-gripping records, that this is visceral rather than straightforwardly cerebral music. If some other players in this scene tend to towards a kind of salon prettiness, Bachman, while no less ornate and virtuosic, is also a sight rougher. He plays surprisingly loud, and favours a thick, aggressive sound that could cut through much rowdier rooms than this one. Even when Fussell joins him, on shruti box drone, for one last song, the mood remains as feisty as it is contemplative. Elevated good-time music, perhaps, where the devotional and the downhome are intertwined in ways which are not always immediately apparent.