To be honest, I’ve not previously had much time for the music of Dan Deacon; for what struck me, perhaps erroneously, as an odd but not quite combustible mix of process, theory, audience participation, electronica and a certain imperishable indie tweeness. 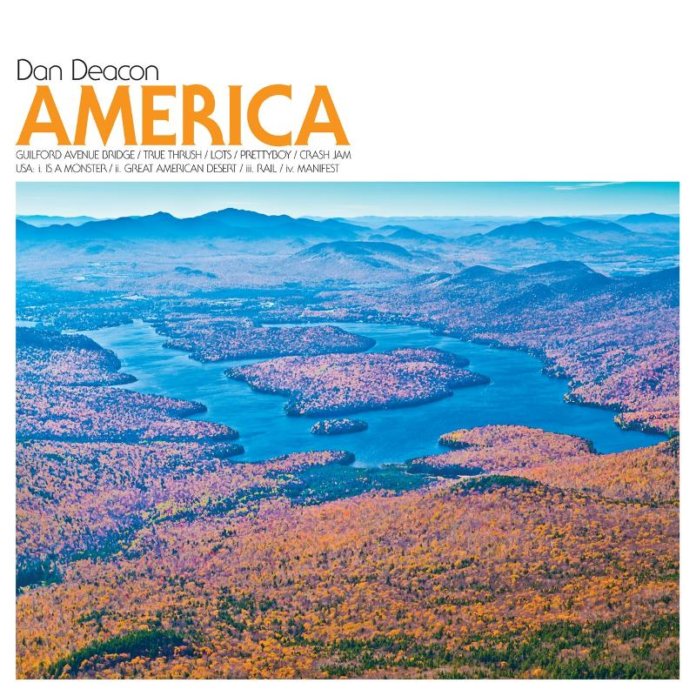 To be honest, I’ve not previously had much time for the music of Dan Deacon; for what struck me, perhaps erroneously, as an odd but not quite combustible mix of process, theory, audience participation, electronica and a certain imperishable indie tweeness.

Persistent exposure to “America” in my house has, however, provoked a bit of a rethink. “America” still has a writhing, fidgety aesthetic but, more than at least I’ve noticed in the past, there’s a dynamic coherence, too, a melodic force and clarity that emerges out of the glitchstorms as something approaching grandeur. The start might be akin to a 2012 upgrade of Kid 606, but soon enough “True Thrush” spins out, an impressively nagging surge of a song that’s part nursery rhyme and part psychedelic carnival stampede, a juggling of the tropes that have proved so appealing on Animal Collective records, but don’t (to my mind, anyhow) coalesce in quite such a satisfying way on “Centipede Hz”.

It’s on Track 4, though, that the greatest strengths of “America” start to emerge, with Deacon’s more formal compositional skills being knitted into an uncommonly exciting soundtrack for his majestic, confusing homeland. “Prettyboy” unveils a sort of vibrating, orchestrated sound that eventually accelerates into the pounding “Crash Jam”, acting as a prelude for the suite which takes up the second half of this increasingly striking record.

The first part “USA 1: Is A Monster” alone manages to incorporate symphonic heft, braindance glitch, tribal drumming, choirs and an overall vaulting ambition and nerve which ensures that the results are spectacular rather than an over-reaching mess. It’s the sort of music that, when you’re listening on the move, noticeably increases the length and confidence of your stride and, less viscerally, prompts a scree of potential reference points.

Deacon, then, can just about plausibly be recast as a millennial Aaron Copland, albeit one who’s listened to a fair bit of Squarepusher records like “Go Plastic” as well, maybe, as conceptual electronic pranksters like Dat Politics. There are passages towards the end of “USA II: The Great American Desert” which begin like gamelan and proceed, perhaps inevitably, into straight-up Glass systems when that track folds into “USA III: Rail”.

Mention of Glass reminds me, too, of Deacon’s similarities with Sufjan Stevens: another notionally indie figure with a passion for incorporating electronica, modern classical composition and an expansive evocation of the USA into his music. While “Rail”’s systems ebb and flow is a neat parallel to passages from “Illinois”, however, many of Deacon’s attempts to build digital noise into his constructs are much more successful than Stevens’ attempts to do something like that on “The Age Of Adz” (maybe closer, now I think of it, to the underrated “BQE” project).

What else? A weird echo of Donna Summer’s “State Of Independence” on “USA IV: Manifest”, and a lot that makes me think of a long-forgotten classical/techno hybrid I came across and liked very much in the ‘90s: Todd Levin’s “Deluxe” (I should check out what happened to him, I guess). Finally, plenty of it reminds me of one of the best things I’ve seen and heard this summer, the Olympics Opening Ceremony: specifically the way Underworld and Danny Boyle grasped that electronic music could invoke nobility and epic feats much more effectively than the Coldplay-style anthemic rock that you’d imagine would have been most directors’ default choice as soundtrack.

There are endless massed drums, then, elegantly-wrought bombast, and a load of music that could have fitted pretty neatly onto the last album by those unlikely soundtrackers of the athletes’ parade, Fuck Buttons. I should say that The Guardian have a stream of “America” here, and a lot of commenters that seem more preoccupied with Deacon’s facial hair than the excellence of his work. Maybe I’m missing something…