There are two attempts early on to get the audience to sing along: one works, one doesn’t. During “Military Madness”, Graham Nash tries unsuccessfully to encourage the audience to join in on his chant of “No more war”. A little while later, however, he’s got the entire Albert Hall singing cheerfully with him on “Our House”, which even leads to the first standing ovation of the night. 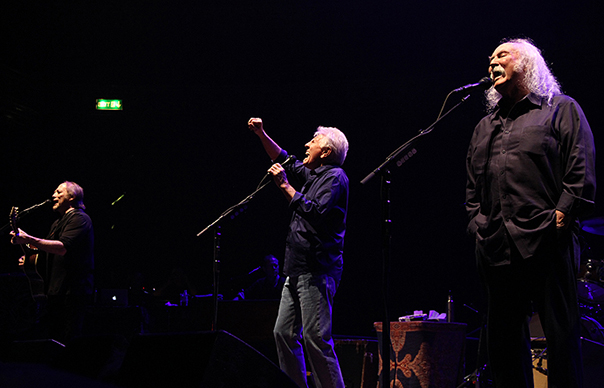 There are two attempts early on to get the audience to sing along: one works, one doesn’t. During “Military Madness”, Graham Nash tries unsuccessfully to encourage the audience to join in on his chant of “No more war”. A little while later, however, he’s got the entire Albert Hall singing cheerfully with him on “Our House”, which even leads to the first standing ovation of the night. There are two sides to CSN – the trenchant anti-war campaigners and the spinners of intricate folk rock harmonies – but clearly tonight’s audience seem more inclined towards a gentle trip down memory lane, enlivened by some light banter between the key players along the way.

The banter is good, incidentally, at this third and final night of the band’s Albert Hall shows. David Crosby calls “Bluebird” by Buffalo Springfield “a song from my childhood”; having ceded the spotlight to his bandmates for a couple of consecutive songs Stephen Stills mutters “It’s still my turn” into his microphone; Nash berates Stills for not being rehearsed enough. It’s all good-natured, and there’s even something faintly democratic in the way they take it in turns to gang up against one other. Like a superhero team-up, each member of the band comes equipped with his own distinct set of strengths. Stephen Stills – at 68, the youngest member of the band – brings with him formidable guitar skills. His fiery solo on “Southern Cross” and the psychedelic riffs of “Bluebird” are both amazing; his voice, although shot in places, still has a warm, caramel quality to it. Barefooted and slightly earnest, Graham Nash is quick to hug Stills after a particularly successful solo, or praise Crosby’s harmonics. His voice is in the best condition of the three. For all his bonhomie, there’s something kind of unreadable about David Crosby. “I write the weird shit,” admits the man behind “Déjà Vu”. He debuts a song from his upcoming album whose sloping basslines and jazzy inflections call to mind Hejira-era Joni Mitchell.

Talking of new songs, they all seem to have a couple in the back pocket. Here’s one Stills started playing the other day at soundcheck, here’s a little number Nash knocked out in Paris… and on they go. While there’s admirable sentiment at the heart of “Burning For The Buddha” – Nash’s new song about the self-immolation of Tibetan monks – musically it feels less successful, closer to a generic Eighties’ soft rock number than any of the more elegant compositions we hear elsewhere tonight. Meanwhile, the slow jam of Stills’ “Don’t Want Lies”, taken from his Rides album, fares better here than it did on that record where it was overwhelmed by Kenny Wayne Shepherd’s bloos rawk work-outs.

In the end, they cover an impressive 28 songs in three hours, with the set divided into two halves. For the first, we get a run through some career highs, starting with “Carry On” and ending with a roaring “Love The One You’re With”. The second half sees CSN play their 1969 debut album in its entirety. Such is the deathless nature of that material that the harmonies of “Suite: Judy Blue Eyes” are rapturous, the space between filled by Stills’ delicate guitar lines, Crosby’s “Guinnevere” and Nash’s “Lady Of The Island” still carry their tender beauty. CSN were always at their peak with these graceful compositions, wafted along on their harmonies and some light acoustic guitar, and this is the very best part of the night. An encore rounds things up with three Nash songs, and one each from Crosby and Stills.

I suppose I have a tendency to overlook CSN – my preference is for the Y in that particular grouping of musicians. But tonight underlines the very specific qualities each of them has, and demonstrates amply that although they can’t quite reach the high notes every time any more, there is still an ineffable magic to their combined voices. There’s a refreshing, twinkly-eyed vitality, too, about the way in which they go about their business.