After last night's Hold Steady-headlined first night, Uncut's stage at The Great Escape continues tonight (May 10) with an opening set from Serafina Steer. 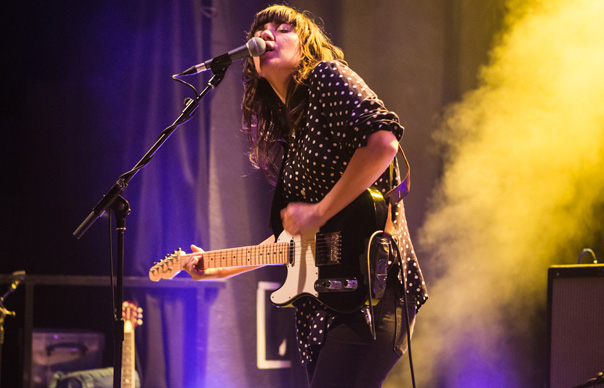 After last night’s Hold Steady-headlined first night, Uncut’s stage at The Great Escape continues tonight (May 10) with an opening set from Serafina Steer.

The English psych-folk singer-songwriter is a real multi-tasker, flitting between her trusty harp, bass guitar and a MiniKorg, joined by guitarist Ben and, on brand new song “Something To Tide Me Over”, an audience member on tambourine.

Steer’s music could certainly be described as ‘ethereal’, with its rippling harp, droning synth (on “The Removal Man”) and Incredible String Band-esque lyrics about “extraterrestrial beings”. It seems this otherworldliness has a limit for Steer, though – after one song, she asks for the lush echo on her voice to be taken off, leaving a starker sound for the rest of the performance.

There’s a pretty large crowd here to see her, despite her early stage time, and Steer seems humble and appreciative of the audience, especially as she’s “outside [her] album cycle”, as she puts it.

Up next are Syd Arthur, a band at the other end of their “album cycle”, having just released their acclaimed Sound Mirror LP. The Kent quartet are that rare thing, a young band influenced by ’70s prog rock, in particular their hometown’s jazzy, psychedelic scene that spawned Robert Wyatt and Kevin Ayers.

In truth, there’s little of the pastoral melancholy of Wyatt and Ayers, with Syd Arthur’s complex time signatures (5/4 is common) and use of violin more reminiscent of mid-’70s Caravan. Raven Bush (yes, nephew of Kate) switches between that, mandolin and keys during the set, while vocalist and guitarist Liam Magill fingerpicks his Stratocaster with considerable skill and precision.

Like Tame Impala, another band they sound like, Syd Arthur aren’t as keen as their ’70s forebears to stretch out and jam, and they only really let go at the end of the set. Still, an impressive and dynamic show.

Ethan Johns fits the bill for The Great Escape as a new bands festival; after all, the master producer’s own career is only two albums old, with his second LP, the Ryan Adams-produced The Reckoning, set to be released at the beginning of June.

“Fuck record cycles!” says Johns (it’s becoming quite a theme tonight), before he and his three-piece band, which includes pedal steel maestro BJ Cole and drummer Jeremy Stacey, perform a new song that’s set to feature on Johns’ currently unrecorded third solo album. Encouragingly, it’s perhaps the best song he plays tonight, a grungy, languorous stomp that sounds very much like Neil Young. One new track from The Reckoner showcases a heavier tack for Johns – “If you can hear hints of Black Sabbath,” he tells the Dome Studio crowd, “you can blame Ryan Adams for that.”

Uncut saw Johns perform at last year’s End Of The Road, solo on the picturesque Garden Stage, and his music definitely benefits from being played by a full band. “We’re gonna send you off with a space jam,” he says before the final, jammy song of the set. “Hope you don’t mind.” Judging from the audience’s warm cheers and applause, it seems they don’t have a problem with that.

The final act of the night, Courtney Barnett, is up next. The Dome Studio is well and truly at capacity, packed with fans and industry people eager to hear tracks from the Australian’s globally acclaimed Sea Of Split Peas double EP.

Her live set is pretty different from the tracks collected on Split Peas – for a start, Barnett handles all the guitar, while on record there are a fair number of overdubs and lush, interlocking parts; more importantly, the restrained atmosphere on record is evaporated by raucous noise, faster tempos and some thrashing, primitive solos from Barnett. The glammy “Blockbuster”/“Jean Genie” stomp of “David” is tonight so exciting, it’s enough to make you wish her two EPs were recorded in such a raw, amped-up style.

It’s clear the audience love her, and Barnett is all beaming smiles throughout the set, bantering with the crowd about swapping shirts and the truth behind the burning of Brighton’s West Pier, among other topics.

Unlike Syd Arthur earlier, Barnett’s vocals are clearly audible, a serious plus when her songs are so reliant on their witty lyrical narratives. Wry medical drama “Avant Gardener” is unsurprisingly the best received song of the night, but closer “History Eraser” runs it a close second. Intriguingly, Barnett performs a new song, which begins with a powerful drum climax that brings to mind nothing less than Nirvana’s ferocious “Breed”. An interesting look at her next move, maybe.