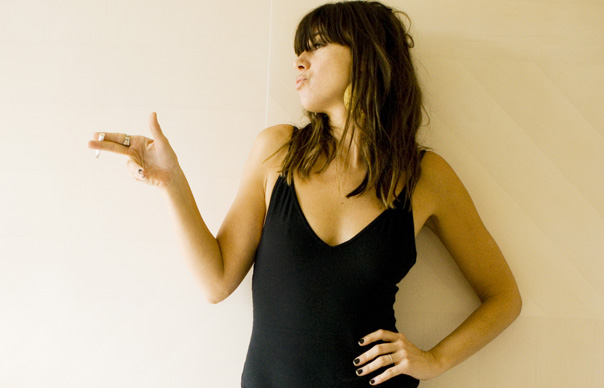 Chan Marshall’s new album, Sun, is reviewed in the latest issue of Uncut (Take 185, October 2012) – this week’s archive feature, from December 2006 (Take 115), finds Marshall recovering from a breakdown after perhaps her most successful year to date. Here, she tells Marc Spitz how she pulled herself back from the edge…

The time is 10.30am, the venue New York’s swish Mercer Hotel. Charlyn Marie Marshall, Chan for short, and Cat Power professionally, has been up a while. It’s not only odd to see her so spry at this un-rock’n’roll hour, it’s a surprise to see her at all; in the flesh, alive and well.

Marshall, 34, is currently at her most successful, both commercially and critically. The response to her seventh album, The Greatest – a downright poetic Memphis soul stew – has been rapturous. And yet, just a few weeks after its release in late January 2006, and on the eve of a sold-out tour, she was committed to the psychiatric ward of Miami’s Mount Sinai Medical Center: dirty, disorientated, possibly suicidal. Although famously erratic, often in public (a 1999 onstage meltdown at New York’s Bowery Ballroom has already passed into myth), Marshall had finally tasted the floor after years of alcoholism, depression and inexplicable shame.

Marshall had been alone and muttering to herself at the very moment that thousands of record buyers, many of them new converts to the Cult of Cat, were just beginning to sing her beautiful songs to themselves.

“I’ll never forget hearing her the first time,” Dave Grohl, who guested on Cat Power’s 2003 release, You Are Free, tells Uncut. “I was in New Zealand. My friend had a mixtape going in the van and ‘Cross Bones Style’ from the Moon Pix album came on. I turned it up and asked, ‘Who the fuck is this?’ I swear, nothing else mattered at that moment. Not the sun. Not the sea. Or the perfect summer day. Her voice was chilling. Her guitar was beautiful. Her words were so pure.”

Marshall, with her hair pulled back, looks older and less cherubic in person than she does onstage or in photos. She’s a muse to fashion designer Marc Jacobs and filmmakers Wong Kar Wai and Harmony Korine (who directed her most recent video for the single “Living Proof”). She posed for the late Richard Avedon, who was reportedly smitten as well. A recent concert in Austin, Texas lured professional cool types David Byrne, Michael Stipe, Jake Gyllenhaal, Sam Rockwell, Michael Imperioli and Vincent Gallo (who she directly addressed in a very early tune, “Mr Gallo”). She’s already the closest thing that her generation – and, some might argue, indie rock in general – has to a real living legend. And she’s now well aware of how perilously close she came to becoming just another dead one. It’s been a great year. It’s been a terrible year, too.

In January, the buzz on The Greatest – recorded with legendary Al Green cohorts Mabon “Teenie” Hodges, his brother Leroy “Flick” Hodges, and a Southern soul all-star team of percussionists and horn players – was that it would be the one to deliver Marshall to the mainstream. Her vocals – softer, sexier and jazzier than usual – seemed perfect for the Starbucks masses. The crack Memphis Rhythm Band, led by Hodges, was booked for her sold-out tour. One week after its release, the album charted Stateside at No 34. And then, just days before the tour was due to kick off, Matador Records, her label since 1996, announced it would be cancelled due to “health reasons”. For the sake of Marshall’s “privacy”, no further details were offered. Most assumed the worst.

“My friend cancelled the tour,” Marshall says with a candour common to rehabbers. “A painter, Susanna Vapnek. She heard my prayers. Had a bad feeling, came down to Miami. I didn’t even recognise her at first. I hadn’t eaten in eight days. Hadn’t answered the phone.”

Marshall spent a week in hospital, emerging on heavy meds, but off the whiskey. “I started reading,” she says of her early sobriety. “I read every Murakami book. I woke up at 6am and swam in the ocean. I didn’t have to be on a plane or at soundcheck. I didn’t have to do an interview. I could come back from the beach, sleep ’til four, go see two movies. I started biking with my friends at sunset. Started thinking about getting a dog. I started being a human being.”

Marshall was born poor to an alcoholic mother and a frustrated musician father. As a child, she used to save up her allowance while planning to run away. “I’d hide it in the mattress because I thought once I had $12, I’d go,” she tells Uncut in a gentle Southern drawl. Once she hit 17, she left Georgia with only a little more than that. And although she was the only member of her family to escape the South, she took a lot of Atlanta with her. Choosing her stage name randomly after a farm equipment company, Marshall spent the early ’90s on the pre-gentrified Lower East Side of Manhattan, doing odd jobs, drinking in dives and writing songs on a $75 guitar. Once she began releasing records, critics found her dissolute, Flannery O’Connor-heroine chic irresistible. But it was, and would remain, a millstone.

“Mental disability tends to run in poor families,” she says, “Due to the oppression. My grandma was a cotton picker. Her mom was a Native American. Alcohol tends to be in the family more when you’re poor and uneducated. I’m illegitimate. My dad’s illegitimate. You either drink or go to church like my grandmother, believe in God and hope for something to keep yourself sane and positive. Did music help me break that cycle? Hell, yeah.”

A deal with Matador and the college radio success of her third album, What Would The Community Think, permitted her to stop looking back; but, to do so, she had to barrel ahead blindly. She lost friends to overdoses, AIDS and violence, but she just kept touring. And drinking. In 1998, she tried to settle down in North Carolina with then partner Smog’s Bill Callahan. Soon, she was recording Moon Pix in Australia with backing band the Dirty Three.

“Drinking, drinking, drinking,” she recalls, “That was the lifestyle…being in bars. I had these shackles on. Being Southern, female, uneducated, poor. Even after I started releasing records, I could never really accept that people wanted to see me, or do interviews. I look at faces in the crowd now and see them smiling at me and I understand it. I don’t think I’m a piece of shit any more.”

Over the weekend Uncut spends with her, Marshall plays three sold-out shows, and she plans to spend much of the remainder of 2006 on the road. There are London dates, too. Most audiences are lifted by the big band’s interpretations of her agonised oldies (her landmark ’96 single, “Nude As the News”, now dovetails into an Otis Redding-style cover of “Satisfaction”), but some purists almost require misery from her. She has two songs already written for her next album, and a possible collaboration with Jack White is in the works.

Life must suddenly be looking pretty good. So will the elimination of her pain diminish her effectiveness as an artist? “I know what you’re saying,” she nods, lighting up a cigarette and exhaling defiantly.

“But it’s tough shit, because it hurt too long.”

The pick of the litter: your guide to Cat Power’s best, pre-The Greatest

“We All Die”
Myra Lee (1996, SMELLS LIKE RECORDS)
With its looped, sludge-punk riff and howling vocals, this five-minute meditation on mortality isn’t far removed from the then-waning Seattle grunge sound, but it’s weirder and more sinister.

“Nude As The News”
What Would The Community Think (1996, MATADOR)
The closest thing Cat Power ever had to a set-closing “encore”, or hit. Ostensibly about a woman telling her man that he’s gonna be a dad, but warning him, “I still have a flame gun for the cute ones…”

“American Flag”
Moon Pix (1998, MATADOR)
Hendrix squeals, hip-hop beats, and a psycho-goth vocal that sounds like it’s being sung from a gurney in the back of an ambulette. Twisted, haunting indie trip-hop with backing band the Dirty Three bringing the disease.

“I Found A Reason”
The Covers Record (2001, MATADOR)
This Velvet Underground cover is arranged (like most of the songs on the album) so that it barely resembles Reed’s doo-wop-influenced original. But it’s one of Marshall’s sweetest vocals; a one-minute-fifty-eight-second-long daydream for lovers.

“Good Woman”
You Are Free (2003, MATADOR)
Country blues, complete with weeping fiddle and gutting goodbyes to a lover she’s either lost or is rapidly losing. Put it on a mixtape for someone you’d like to damage.