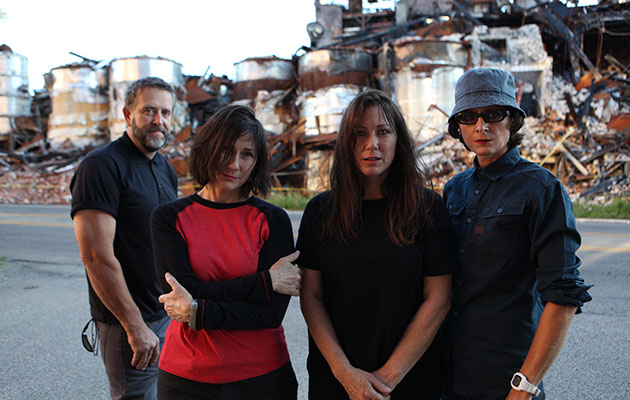 Following on from the release of their brilliant new album, All Nerve, THE BREEDERS and their closest confidants look back with Tom Pinnock on the music, friendships and troubled times at the heart of their remarkable saga. “I don’t know how other people do it,” says Kim Deal. Originally published in Uncut’s April 2018 issue.

Kim Deal is reflecting on the significance of Dayton, Ohio, in the story of her band The Breeders. As with much of the American Midwest, Dayton has been hard hit in recent years and is in search of an economic turnaround.

“The recession was pretty devastating over in the middle of States,” Kim recalls. “All these little main-street towns you’d go down, 35mph and a couple of stop lights? The towns are still there, but everything’s shut down. But let’s be positive about it. We have a friend who has a pool, he invites us over. We have the Cincinnati Reds baseball team, we go to Reds games. We watch football at each other’s houses – that’s an all-day big deal.”

The band’s bassist Josephine Wiggs, who is originally from Bedfordshire, has an outsider’s perspective on Dayton’s decline. “Building shopping centres in the suburbs of Dayton killed the city centre,” she says. “But now there are all these awful decrepit strip malls, 70 per cent empty but with a couple of incredibly sad businesses, a grim-looking sushi restaurant and maybe a taekwondo studio.”

All the same, Dayton – other famous alumni: the Wright brothers, Martin Sheen and Guided By Voices – is central to the music, and lives, of The Breeders. Deal still lives there, as does her sister, lead guitarist Kelley and drummer Jim Macpherson, while Wiggs splits her time between Dayton and New York. Macpherson, meanwhile, works as a master carpenter when he’s not behind the drums; his wife cares for the Deals’ mother, who has Alzheimer’s. When they’re not rehearsing or recording, the Deal sisters also get ice cream with friends, organise barbecues and delve into the grisly shows on the Investigation Discovery network.

“They’re profoundly goofy together,” says Steve Albini, the band’s longtime producer. “Kim and Kelley are both really into true crime – they can blow an evening on killers and murder gossip easily.”

While basements are often the scene for just the kind of macabre crime depicted in these shows, Kim’s is reserved instead purely for acts of a musical nature. It was there, for instance, that the quartet put together All Nerve – The Breeders’ first album since 2008 and the first with the ‘classic’ lineup since 1993’s Last Splash. Just 11 tracks and a compact 34 minutes, it includes a bolshy cover of Amon Düül II’s krautrock gem “Archangel’s Thunderbird” and runs the gamut from sweet (the crystalline “Dawn: Making An Effort”) to caustic (the glowering “Nervous Mary”).

Despite their pedigree, The Breeders still operate like something of a cottage industry, self-funding their records, with no personal assistants or day-to-day managers involved; it’s admirable, but in Dayton it’s also something of a necessity.

“We’re in Ohio,” says Kim, “there’s no business management or music management – or even an accountant that does books for bands. The idea of a personal assistant out here would be like, ‘Fuck you, I got my own shit to worry about!’”

The idea of a Breeders reunion seemed unlikely a few years ago. To get there, they patched over a lot of hurt. When this lineup splintered in 1995, English bassist Josephine Wiggs had long gone, lead guitarist Kelley Deal was in rehab in Minnesota after being arrested for heroin possession, and Jim and Kim had formed the hard-drinking, short-lived Amps. With help from the band, long-time producer Steve Albini, engineer and technician Mike Montgomery and co-founder Tanya Donelly, Uncut pieces together The Breeders’ tale of long estrangements and renewed friendships, drug abuse and sobriety, and some of the finest rock songs of the last few decades. Along the way, conversations take in Deal’s final departure from Pixies, and the torment of creating finished records.

“I mean, all of them are just so hard, you know?” Kim laughs, when Uncut asks if any of The Breeders’ albums have been a breeze to make. “They really are! I don’t know how other people do it. I wish I did.”