To get to the Clyde Auditorium - the 3,000-seat venue crouched on the riverbank beside the SECC, which Glaswegians only ever refer to as The Armadillo - you have to traverse a long, wormy, weather-beaten covered walkway that bridges a motorway. 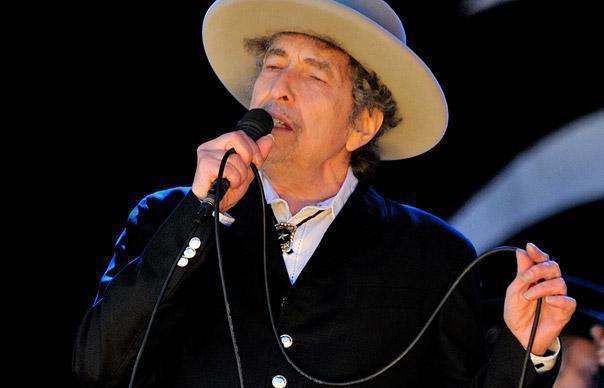 To get to the Clyde Auditorium – the 3,000-seat venue crouched on the riverbank beside the SECC, which Glaswegians only ever refer to as The Armadillo – you have to traverse a long, wormy, weather-beaten covered walkway that bridges a motorway.

On the three wintry nights that Bob Dylan and his band are in residency, this shabby arcade plays home to a generous gauntlet of buskers, lined up at regular intervals along the path like exhibits in a strange living waxwork museum devoted to a particular idea of Bob Dylan.

Except for the guy shredding blues on banjo, all are solitary men armed with acoustic guitars and harmonicas, and as you pass, they offer strident, vibrant, faithful echoes of “A Hard Rain’s A-Gonna Fall”, “The Times They Are a-Changin’”, “I Want You”, “Lay Lady Lay”, “Like A Rolling Stone” and other deathless songs that you are not going to hear when the real Dylan takes to the stage this time around.

Among the voices in the crowd, the song can also remain the same. Inside the Armadillo, over three nights, I heard the same conversations and comments repeat as on a loop, and found myself surprised, again, to realise there were still people turning up somehow expecting to see the Dylan of the 1960s or 70s take to the stage, the man alone behind an acoustic guitar. Meanwhile, the newspapers seem largely content to run rewrites of the reviews they have been running for 30 years or more: he changes the songs so much you can’t recognise them; you can’t make out what he’s singing; his voice is weird; you never know what he’s up to.

This time around, though, a brand new, contrary complaint has been added to the repertoire, one that is already well on its way to becoming a standard. This one from frustrated diehards who follow Dylan’s live shows as a nightly ritual, either in person, or online, ticking off the set lists (the moral of the tale: if you’re going to sing about trains, then you’re going to attract trainspotters): he’s playing the same songs every night.

Leaving aside that, when collecting bootlegs of the 1966 world tour, few among the same hardcore ever seem to complain that Dylan and The Hawks just did the same set night after night, it’s true. In 25 years or so of catching Dylan whenever I’ve had the chance, I’ve never before seen him do the same songs, in the same order, two nights running. And here he is doing it three nights in a row. I wish it had been four.

If you came out expecting to see the Bob Dylan of four or five decades ago, these concerts might have been a disappointment, or possibly a revelation. If you came out to see Bob Dylan, though, they were thrilling. That unchanging setlist is an astonishingly defiant statement. Of the 19 songs played, only six were written before 1997, and only three come from the hallowed 1960s, and two of them don’t appear until the encore.

Entire books of the Dylan Bible are just tossed away – nothing from Highway 61 Revisited, no sign of Blonde On Blonde – as he focuses long and hard on his most recent work, and in particular current album Tempest, easily dominating the setlist with six songs.

The show begins the same way every night, with rhythm guitarist Stu Kimball in the shadows stage left, strumming out an ominous, twanging overture on acoustic guitar. It trips up and falls clattering right into “Things Have Changed” as the rest of the band arrive and the lights come up. Not that they come up much; for large parts of the night, the bare, intimate lighting is kept as dark as I’ve ever seen on a concert stage.

Dylan is there out front, alone at the mic in those stage duds that look to have been designed by a committee of Nudie Cohn, a 1940s street gang and a Civil War army supplier. He rocks and bounces, throws in tiny dramatic gestures – a hand on the hip or to the heart, a gunslinger point of the finger – wipes the sweat from his eyes. Then comes the voice: a rattle, a bark, a whoop, a whip, a snarl, a tease. Or, as the band go into a version of “She Belongs To Me” which pulses and shimmers as though Daniel Lanois had reworked it while dreaming about Mo Tucker, or a “What Good Am I” that comes on like twilight in the country, a purr like velvet.

Watching the same set for three nights, watching how they dig deeper down into this territory, a few things become apparent. One is how much Dylan is focussing on his singing, conscious of the present day limitations on his voice, but also, increasingly, testing them. Another is how this apparently fixed set is far from some static, machine-tooled thing.

Like Dylan, the band rarely look out into the audience, too involved in watching what they’re playing, watching each other, and watching Dylan for the cues on where to go. Precisely where a song will end is by no means predetermined. Endings can be, and are, left ragged. Improvised call-and-response interplays open up within the long groove fields of the songs, particularly between Dylan’s piano and Charlie Sexton’s hotwired lead guitar, and they shift and change from show to show.

How alive it is becomes clear on the second night, the standout night of the run, when the energy levels, and the intensity of everything happening onstage seem to get kicked up by several per cent, and Dylan’s vision of a place where Duke Ellington, Hoagy Carmichael and Howlin’ Wolf meet is most strongly articulated.

He stretches his voice a lot more this night, at some points leaving his current growlin’ wolf mode to venture into something like the higher registers of the old. The back and forth with Sexton sparkles through a spiralling, countryfied “Tangled Up In Blue”, a song that is forever on the road, still changing and aging with Dylan continuing to edit and rewrite the lyrics as he goes. Similarly, when we arrive at an exquisite “Simple Twist Of Fate” we find things have changed. The object of desire in the song now tells the abandoned lover, “You should’ve met me back in ’58…”

The adaptability of the band is clearest on the second night, too, when technical gremlins savage Tony Garnier’s bass on the first encore of “All Along The Watchtower” and the rest of the band flood in to fill the gap while he sorts it out, before easing into the quietly glorious and quite gorgeous soft-shoe soul shuffle that is currently “Blowin’ In The Wind”.

But it is the newer songs that define Dylan in 2013, without argument. “Beyond Here Lies Nothin’” is a pure thrill, a dramatic, tumbling junkyard cantina tango, Strictly Come Dancing by way of Tom Waits. “Forgetful Heart” is an almost show-stopping, almost heart-stopping performance by Dylan, whispered and pensive over Donnie Herron’s mournful fiddle. The grotesque details and spiked banjo of “High Water” get more dead-eyed mischievous and sinister with every passing disaster. “Duquesne Whistle” just truly rocks and rolls, and rolls, allowed to stretch out as Sexton’s rockabilly fills flash away like white lightning. “Early Roman Kings” pounds and rattles, drummer George Recile going at it as if he was driving steel nails into the ground. “Pay In Blood” is vicious, Stonesy, dripping.

Every night, though, one song shines out over everything else. When I first heard “Long And Wasted Years” on Tempest, I thought it was the standout, but I also figured it was a song I’d be unlikely to ever hear Dylan perform live. Something about that dense, rousing tumble of words, ripped and torn from here and there and god knows where and then collaged straight onto his experience of life; something about the astonishing declamatory style, an unexpected return to the voice of “Brownsville Girl” and the stance of “Angelina”; and something about the odd looping of the music, that endless, strange carnival ride down and down and down – it just didn’t seem like something he’d be doing onstage often, if at all.

Here it is, though, three nights straight. Pinned up as the climax of the main body of the set. The lights on stage are suddenly blazing, the band are hitting the music astonishingly hard, and Dylan stands out front alone again, feet planted, telling the truth, or something that feels like it while it lasts. It hits like waves of gold, like time coursing around you and through you. It is just fantastic. If someone told me it was the best thing he had ever done, I might believe them.

Each night, it brings the crowd to their feet. On the last night, the first few rows of the audience get past security and crowd standing along the front of the stage for the encores, still thrilling from it. The last two songs feel like another venue – The Armadillo is a somewhat soulless place, although the sound is good – and, at the end, as “Blowin’ In The Wind” skips softly away, Dylan surveys their faces. He weighs up the odds, takes his chances, and takes a step forward, bends over into the crowd, slapping high-fives with audience members who look at once visibly shocked, and like kids at Christmas who just found out Santa is real.

Then he’s off, down the road to Blackpool, of all places. As I enter the walkway to head back home, the first busker is playing “Mr Tambourine Man.” He looks like Donovan.
Damien Love

You can read our review of Dylan’s Albert Hall show from November 26 here.

SETLIST
Things Have Changed
She Belongs To Me
Beyond Here Lies Nothin’
What Good Am I?
Duquesne Whistle
Waiting For You
Pay In Blood
Tangled Up In Blue
Love Sick

ENCORE
All Along The Watchtower
Blowin’ In The Wind