Boards Of Canada interviewed: “We’re too busy to give a shit!”

Been meaning to post this piece for a while, since the whole clandestine operation around the new Boards Of Canada album, “Tomorrow’s Harvest”, began. It’s an interview I did with the duo in February 2002, around the release of “Geogaddi”. NME billed it erroneously as “Boards Of Canada’s first ever interview” at the time, which was pushing it a bit… 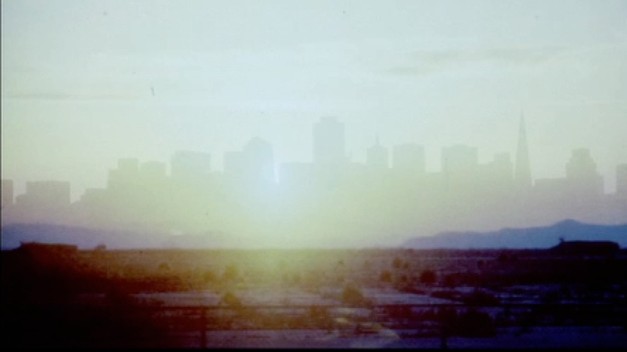 Been meaning to post this piece for a while, since the whole clandestine operation around the new Boards Of Canada album, “Tomorrow’s Harvest”, began. It’s an interview I did with the duo in February 2002, around the release of “Geogaddi”. NME billed it erroneously as “Boards Of Canada’s first ever interview” at the time, which was pushing it a bit…

From the Pentland Hills, just south of Edinburgh, it’s possible to examine the world at a different angle. Nature becomes reduced to a pattern of hexagons. Melodies sound better in reverse. Bonfires make for better nights out than clubs. And the colour of the universe is, unequivocally, turquoise.

This is where Boards Of Canada, Britain’s most exceptional and reclusive electronica group, see things from. Or, at least, how they may see things. In comparison, the Aphex Twin is an open book, as straightforward in art and life as Fran Healy. A trawl of the internet for facts about the Boards duo of Michael Sandison and Marcus Eoin turns up a proliferation of witchy rumours but precious few hard facts. They record in a disused nuclear bunker, it’s suggested. They belong to some defiantly obscure art-collective-cum-cult named Turquoise Hexagon Sun. They fill their music with backwards messages, alternately sinister and playful, that range from invocations to a “horned god” (one old side project was named Hell Interface) to samples of ELO’s Jeff Lynne.

In the Boards of Canada section of the Warp Records website, alongside cover images and a few scant details about release dates, is a link to a Guardian news story which offers conclusive proof the average colour of the universe is “A greenish hue halfway between aquamarine and turquoise” when all visible light is mixed together.

All very intriguing, of course. But when BOC have made one of the most anxiously anticipated albums in years, hardly satisfying. To date, Sandison and Eoin have made a tremendous amount of music, most of which has neither ever been released or else is long unavailable; their 1996 debut EP for the Skam label, “Twoism”, is currently available for a tidy £710 on eBay. For most people, their reputation rests on ‘Music Has The Right To Children’, the 1998 album that mixed spectral, quasi-ambient melodies and dulled hip-hop beats with the constant chatter of infants, hovering tantalisingly beyond comprehension. Deceptively simplistic, there was something about the way the melodies twisted backwards and forwards around each other, about the tangibly creepy atmosphere that pervaded it, that made for an extraordinary debut.

By the time ‘In A Beautiful Place Out In The Country’ an uncommonly beautiful EP, was released at the end of 2000, the band enjoyed a near-holy status among electronica fans – not to mention artists, plenty of whom had diligently adapted BOC’s spooked, rustic kindergarten vibes for themselves. And when the long-promised second album, ‘Geogaddi’, unexpectedly appeared on release schedules a month ago, the grassroots hype became phenomenal.

Knowing that part of the band’s allure is their inaccessibility, Warp embarked on a campaign to make hearing ‘Geogaddi’ as difficult as possible. Virtually no new music made it onto the internet: download apparently new tracks from Audiogalaxy and you’re as likely to discover an ambient fake, four minutes of looped speech samples or an old Brian Eno tune. The track titles, meanwhile, could only be located on HMV’s Japanese site. Eventually, ‘Geogaddi’ was premiered in six churches around the world – in London, New York, Edinburgh, Tokyo, Berlin and Paris. Slides of children playing, of sunsets where the sky is bent into a hexagon, were projected above the altars. Small turquoise hexagons took the place of hymn books.

And then there was the album: 66 minutes and six seconds of music that is both soothing and disorienting, lushly beautiful yet creaky and unnerving. One track, ‘Opening The Mouth’, sounds like a heavy-breathing call from a banshee. Another, the truly horrible ‘The Devil Is In The Details’, alternates between the instructions on a relaxation tape and a desperately crying child. There are ghostly organs and distant tablas, warnings of volcanic explosions, an ecstatic vocal about “1969 in the sunshine” and an overall feeling that this heady, saturated music is how My Bloody Valentine might’ve sounded had they released anything after 1991’s ‘Loveless’. Honestly, it’s that good.

“We take that as a real compliment,” accepts Sandison. “We love the sound of music that seems to be barely under control. We love music that’s out of tune in a beautiful way, or dissonant, or damaged. We tried to make the record work as a giddy, swirling soundtrack. It’s okay to be imperfect – in fact the imperfections are where the magic is. To us, perfect music sounds sterile and dead. The tunes we write are imperfect, the sounds are imperfect, even the artwork. I can’t listen to perfect music, it bores me. We actually put a lot of effort into making things rough and difficult and noisy, even more so on this than on the last album. I think most bands get more polished and over-produced as they go along. But one of the ideas with ‘Geogaddi’ was to go the opposite way, to get it to sound as though it was recorded before the last one.”

Early February 2002, and boards Of Canada have consented to a rare interview with NME, on the understanding it runs after the album’s release. To preserve their privacy, it’s to be conducted by email, but the resulting answers still shed a little light on the world of Sandison and Eoin, without ever completely dismantling their mystique.

To begin, their name derives from the National Film Board Of Canada, whose nature documentaries enraptured the Scottish-born pair when they spent some time living in Calgary as children. “My parents worked in the construction industry out there,” writes Sandison. “My memory of Calgary is a picture of boxy 1970s office blocks dumped in the middle of nowhere against a permanent sunset.”

They started making tapes around 1982 or ’83, when they were still children. At their Hexagon Sun studio, there’s an archive of 20 years of music. “We’re a bit anal about this,” admits Eoin, “and I guess one year we might hunt through it all and release some of it. Though we’ve actually already got the next album half-finished, which will surprise some people to hear. There’s a lot of music.” Though the paucity of their released might suggest otherwise, Sandison and Eoin are anything but lazy. “A typical day for us,” writes Eoin, “is something like 15 hours thumping the shit out of drums and synthesizers and samplers, with frequent breaks for coffee or a beer.” Expectations and pressures from the outside world hardly make an impact, either.

“We’re too busy to give a shit,” reckons Sandison. “Either working in our studio or being out in the fresh air with our friends somewhere. We put pressure on ourselves more than anything. Marcus and myself are pretty ruthless to one another, musically. That’s the toughest criticism we get, which is another reason the album took a long time.”

Why is it so much better to live in the country rather than the city?

Mike: “I don’t think it’s easy to be truly independent as an artist at the same time as being part of an urban community. I’m not saying it’s impossible, but it just doesn’t suit us. Besides, when I’m faced with the choice of hanging out with my friends round a bonfire where we live, or being squashed in a London tube with some suit’s elbow in my face, it’s an easy choice to make.”

What’s the significance of hexagons to you?

Marcus: “The hexagon theme represents that whole idea of being able to see reality for what it is, the raw maths or patterns that make everything. We’ve always been interested in science and maths. Sometimes music or art or drugs can pull back the curtain for you and reveal the Wizard of Oz, so to speak, busy pushing the levers and pressing buttons. That’s what maths is, the wizard. It sounds like nonsense but I’m sure a lot of people know what I’m talking about.”

The turquoise hexagon sun idea, the ring of people on the ‘Geogaddi’ cover, and that slightly eerie bucolic feel there is in a lot of your music, suggests something cultish, vaguely pagan.

Mike: “That’s probably just a reflection of the way we live our lives. We are a bit ritualistic, although not religious at all. We’re not really conscious of it in our music but I can see that it is happening. We’re interested in symbols. I don’t know, we never just make a pleasant tune and leave it at that, it would be pointless. So I suppose there is an intention to let the more adult, disturbed, atrocious sides of our imaginations slip into view through the pretty tunes.”

What’s the fascination with children’s voices? Is it to do with a nostalgia for childhood?

Mike: “It’s something that has a peculiar effect in music, it ought not to be there, especially in atonal, synthetic music. It’s completely out of place, and yet in that context that you can really feel the sadness of a child’s voice. Being a kid is such a transitory, fleeting part of your lifespan. If you have siblings, then if you think about it, you’ll have known them as adults for a lot longer than you ever knew them as children. It’s like a little kid lost, gone.” You’ve talked in the past about subliminal messages, hidden ideas, bombs planted in your tunes. What’s the fascination, and what form do these take?

Marcus: “If you’re in a position where you’re making recordings of music that thousands of people are going to listen to repeatedly, it gets you thinking, ‘What can we do with this? We could experiment with this…’ And so we do try to add elements that are more than just the music. Sometimes we just include voices to see if we can trigger ideas, and sometimes we even design tracks musically to follow rules that you just wouldn’t pick up on consciously, but unconsciously, who knows? ‘The Devil Is In The Details’ has a riff that was designed to imitate a specific well-known equation, but in musical terms. Maybe it won’t mean anything to anyone, but it’s interesting just to try it. We do things like this sometimes.”

One thing Boards Of Canada are emphatic about, for all the talk of bonfires and rural retreats, is that they’re not hippies. We ask if they’re a psychedelic band, and Marcus replies: “If you mean psychedelic in a scientific way, then, yeah, that’s probably fair. But if you mean it in a lifestyle way, you know, hippy-large floppy hat, patchouli oil and colourful trousers way, then nothing could be further from who we are.”

Further from what, though? Tempt BOC into the open for a few moments and still, you can only make out the faintest of outlines. And ask them, finally, how important mystery and a lack of information is to their music, and they’ll prove it by sidestepping the question. “We just try to keep ourselves to ourselves,” concludes Marcus Eoin. “The music is what is important.” Of course.