An unsentimental tribute to the silent era...It is very easy to become consumed by a cosy nostalgia for the silent era. We all know Gloria Swanson’s anguished protest as the ageing silent queen from Sunset Boulevard: “We didn’t need dialogue. We had faces!” We’ve seen Chaplin’s bow-legged walk, Keaton’s stony-faced escape-artistry and Harold Lloyd dangling from the clock face. 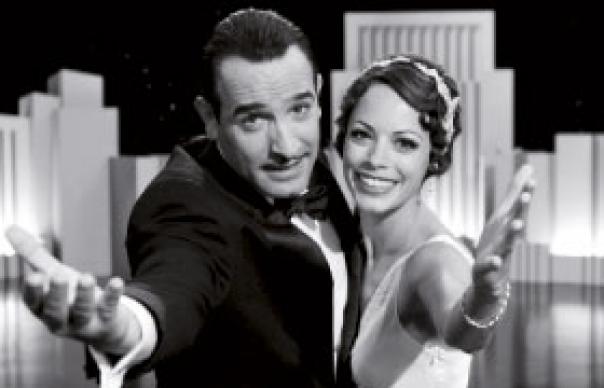 An unsentimental tribute to the silent era…It is very easy to become consumed by a cosy nostalgia for the silent era. We all know Gloria Swanson’s anguished protest as the ageing silent queen from Sunset Boulevard: “We didn’t need dialogue. We had faces!” We’ve seen Chaplin’s bow-legged walk, Keaton’s stony-faced escape-artistry and Harold Lloyd dangling from the clock face.

In depicting the Hollywood of the late 1920s, French director Michel Hazanavicius risked lapsing into maudlin kitsch. To make a silent movie in 2011 seems, at first glance, a highly perverse endeavour. It could easily have turned into an excruciating exercise in which actors pulled faces, performed pratfalls and goofed for the camera. Memories of Mel Brooks’ misfiring Silent Movie, with its contemporary setting, and of the Two Ronnies’ recreations of silent films don’t inspire confidence. Hazanavicius’ own OSS spy movies were pastiches. But this is a film of extraordinary grace and elegance.

The plot is conventional. The writer-director offers us yet another variation on A Star Is Born. George Valentin (Jean Dujardin) is a movie star who hits hard times when the talkies arrive. Bérénice Bejo is the pretty young flapper who flourishes as he declines. So far, so familiar. But what makes The Artist immediately enrapturing is the sheer zest of Dujardin’s performance. Anyone who has seen Douglas Fairbanks leaping off balconies, on and off horses and conducting swordfights with multiple adversaries without ever losing his carefree quality will recognise Dujardin as an actor in a very similar mould. His ease of movement, his smile and his winning tendency toward self-deprecation make him completely plausible as a silent-movie idol. His irrepressible quality is matched by Bejo as Peppy Miller, the ambitious young chorus girl on the make. Both have wraparound smiles and can hoof it like old-time vaudeville performers.

Another of the film’s strong points is its unsentimental depiction of Hollywood. We have John Goodman as an unforgiving, cigar-chomping mastodon of a studio boss who judges even his most favoured actors by their box-office results. The moment Valentin fails to make enough money, he is cast out. The public, the studio boss tells him, wants “fresh meat”. Only his dog, a precocious Jack Russell, and his old butler (a morose James Cromwell) stay loyal as all his old friends melt away and his money evaporates. The world the film depicts when Valentin is on his uppers is reminiscent of that described in F Scott Fitzgerald’s Pat Hobby stories, about an alcoholic screenwriter who once knew the bigshots and had a house with a pool, but is now scrambling for any job he can get. Hazanavicius uses absurdity to undercut the sentimentality in his depiction of Valentin’s fall from grace. The most poignant moments always come laced with irony. A suicide attempt turns into one of the film’s most rousing (and comical) set-pieces.

“The more research you have done, the more you can play with it,” the director has commented of his exhaustive work in studying silent cinema and reading the many biographies of the stars who, like Valentin, fell from grace. Strangely, silent cinema – once a hugely powerful popular cultural form – has now fallen into the hands of the academics. Scholarly researchers pore over restorations of old silent classics or argue the merits of rediscovered films. Silent-movie compilations, once a mainstay of kids’ TV scheduling in the UK, have largely vanished. When they’re shown or discussed, it’s invariably on art shows on minority channels. If The Artist is the success that many are predicting, it may help to bring a neglected form back towards the mainstream.

Initially, the lack of spoken dialogue is discomfiting. Once you’ve adjusted to its storytelling conventions, though, you almost forget that this is a silent film. The gorgeous black-and-white cinematography by Guillaume Schiffman, the dramatic music and the sheer verve and pace of the storytelling are likely to disarm even the most critical of viewers. The Artist is an audience-pleasing comedy melodrama, as sure-footed throughout as Dujardin and Bejo in their dances together. Why did we ever doubt that images work better than words?
Geoffrey Macnab