Tony Visconti and other early Bowie collaborators spill the beans 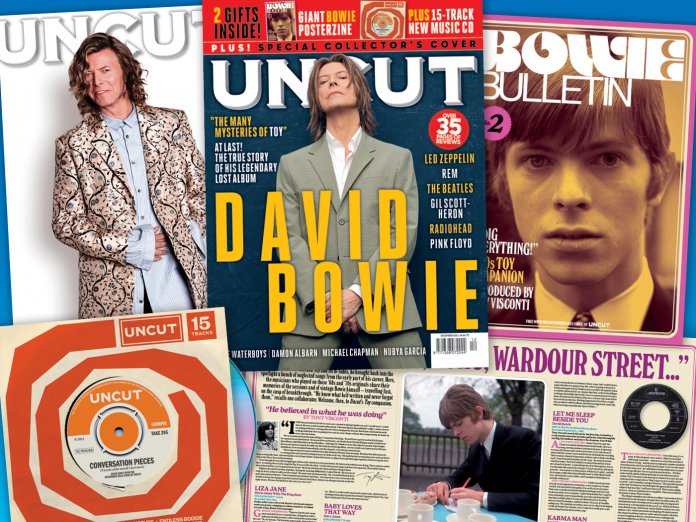 The December 2021 issue of Uncut – in shops now and available to order online by clicking here – comes with not one but two free gifts: a 15-track CD of the month’s best new music and a giant fold-out David Bowie posterzine, celebrating the upcoming release of his ‘lost’ album Toy.

When Bowie recorded Toy and its B-sides, he brought into the spotlight a brace of neglected songs from the early part of his career. In our posterzine – entitled Bowie Bulletin No. 2 – the musicians who played on those ’60s and ’70s originals share their memories of the sessions and of vintage Bowie himself – travelling fast, on the cusp of breakthrough.

“I saw the potential in David as soon as we started working together in 1967,” Tony Visconti tells us. “I could see it, I could hear it. He was so driven and enthusiastic. I first met him in my publisher’s office, with a view to recording with him, not long after he’d been dropped by Deram. But I knew all about his early writing and knew he was going to be a star in some shape or form. More importantly, he knew he was a star back then.

“Even though he was still struggling to sell records, David was very persistent. He believed in what he was doing. That’s why he ended up re-recording those early songs for Toy. It was as if he decided, ‘I wrote these great songs and they were ignored. If you didn’t know about them before, you’re gonna know it now!’ He knew what he’d written and never forgot them.”

You can read much more from Tony Visconti, plus a host of other early Bowie collaborators, in Bowie Bulletin No. 2, free with the December 2021 issue of Uncut – on sale now!