"These abstract complex feelings..." Björk finds a way, perhaps, to handle them... 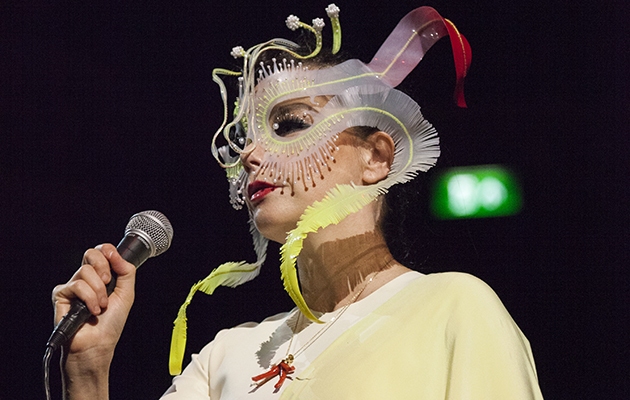 It can, admittedly, be quite hard work to sell Björk as a visceral rather than ethereal artist. Take the way she arrives onstage at the Royal Albert Hall, for her first full show in a year: a figure in avant-garde classical drapery, masked to resemble some fluorescent hybrid of cat and orchid. Adjectives of magic and otherness still inexorably cluster around her as they have done so often, and so tiresomely, over the past three decades.

But while her features may be obscured, this is a defiantly flesh and blood manifestation of Björk, re-engaging after a year of apps, masks and augmented reality obfuscations. Tonight’s show is constructed around 2015’s Vulnicura, a suite of songs so intimate that her retreat into safe virtual spaces seems understandable, and her return to performance a harrowing trial. The digital edges of the Vulnicura songs are absent here, with Björk’s exegesis of her ruined marriage exposed further by the extravagant simplicity of the settings: nothing but voice and string orchestra, whose size never mitigates against subtlety.

“Black Lake”, even more so than the original recorded version, is punctuated by long passages of minimalist catgut drone, slowly fading out of audibility before Björk starts singing again. There are no visual distractions, just an unforgiving focus on her words, her voice – still astounding – and her movements. These small expressive gestures and half-dance moves have a fallible, humane grace that comes from a gawkiness, at times verging on clumpiness, powerfully at odds with the radical couture decisions and spritelike clichés.

As with Nick Cave’s recent Skeleton Tree, it’s easy to be distracted by the emotional heft of the Vulnicura songs, and hard to separate their aesthetic potency from the context in which they were written. Sometimes the invocations have a desperate sort of urgency: “Love will keep us safe from death,” she promises in “Notget”, at the fraught climax of the concert’s first half. At others, the experience can feel voyeuristic as, amidst the blasted expanses of “Black Lake”, she sings, “Family was always our sacred mutual mission/Which you abandoned.” Hiding at least some of her emotions behind diaphanous masks then seems a necessary, if flimsy, defence.

Still, a short second set, including some earlier songs, points up how the likes of “Stonemilker” and “Lionsong” now rank among the very best work of a storied career. Prefaced by Vulnicura’s litanies of heartbreak, Björk’s old paeans to love and security accumulate a new and fragile poignancy. The ship’s horns of “Anchor Song” are replaced by gently ebbing strings as she relocates a place of safety, while “I’ve Seen It All” seems to balance precariously between the wonder of the original and an earned world-weariness.

The most daring reinvention comes in the encore, as the punishing techno of 1997’s “Pluto” is reconfigured into a matrix of orchestral stabs and wordless ululations. As with many attempts to make scores out of dance music, a certain menace comes to the fore, with the strings taking on a Bernard Herrman-esque timbre of encroaching horror, even as Björk’s raw energies seem to be channelled into something closer to joy and, after a fashion, abandon. Afterwards, the crowd keep singing the refrain like an Icelandic football chant, clapping and stamping out the rhythms so that the whole Albert Hall is transformed into a frantic Luddite rave, a demonstration so overwhelming that it forces Björk back out of her dressing room to offer further benedictions and thanks.

The evening’s highlight, though, comes a little earlier, when “Pagan Poetry” turns into a revelatory enactment of the bond between singer and audience. As she stomps at the edge of the stage, as disdainful of her autocues as she has been all night, she chants “I love him” a cappella over and over, then is visibly rattled by the crowd adding the record’s harmonies of “She loves him”. Here, perhaps, is how a performance of such intimate personal material can turn out to be consolatory rather than masochistic. An answer, perhaps, to the question posed earlier in “Lionsong”: “These abstract complex feelings/I just don’t know how to handle them.”