Apart from a rather undignified search on secondary ticketing websites for Rolling Stones tickets, I spent part of my weekend listening to Jim Williams’ folktronic score for Sightseers, a terrific black comedy from Ben Wheatley. 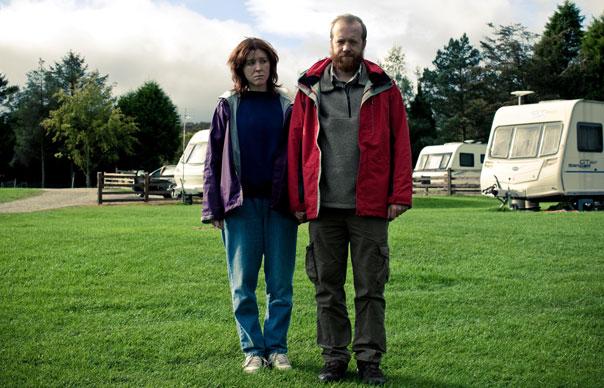 Apart from a rather undignified search on secondary ticketing websites for Rolling Stones tickets, I spent part of my weekend listening to Jim Williams’ folktronic score for Sightseers, a terrific black comedy from Ben Wheatley.

Wheatley is enjoying a tremendous run of success at the moment, from low-budget crime drama Down Terrace to the violent Kill List and now Sightseers. His next film, A Field In England, is set during the English Civil War and which Wheatley described in The Independent as heritage drama meets a Roger Corman drug movie. Which is the essence of what Whealtey does: he splices genres, often with devastating results. Kill List, for instance, started out as a drama about two hitmen getting back together for an assignment before morphing into a nightmarish piece of English folk horror. Similarly, Sightseers could be described as Nuts In May meets Natural Born Killers.

Sightseers finds Chris (Steve Oram) talking his new girlfriend, Tina (Alice Lowe), on a caravanning holiday round northern England: hotspots include the Critch Tram Museum, Ribblehead Viaduct and the Keswick Pencil Museum. “I know all kinds of people who’ve had bad experiences in caravans,” warns Tina’s dreadful, disapproving mother before they leave, and you might be forgiven at first for thinking that Wheatley was aiming for Race With The Devil relocated to the Peak District. Chris – fusty, ginger-bearded, apparently trying to write a book – has problems expressing himself. Tina, desperate for his approval, becomes his muse: “I’ve never been a muse before,” she says, delightedly. But it soon becomes clear something is amiss: “I just want to be feared and respected,” Chris explains, as the bodies pile up. “That’s not too much to ask, is it?”

Catching pale, wintry light as it hits the lonely landscapes of Yorkshire, Derbyshire and Cumbria helps create an eeriness familiar from Kill List. But working from Oram and Lowe’s script – their characters have been developed over time in local comedy workshops – Wheatley’s film is funnier than its predecessor, even pausing for moments of pathos. You might even detect something of Alan Bennett or Victoria Wood in the characters’ fussy small-mindedness. For all its dark pleasures, one of the film’s lingering qualities is the way Wheatley shoots these out of the way, peculiarly English museums – perpetually shrouded in drizzle, the filmic equivalent to a Morrissey b-side.

Sightseers opens in the UK this Friday