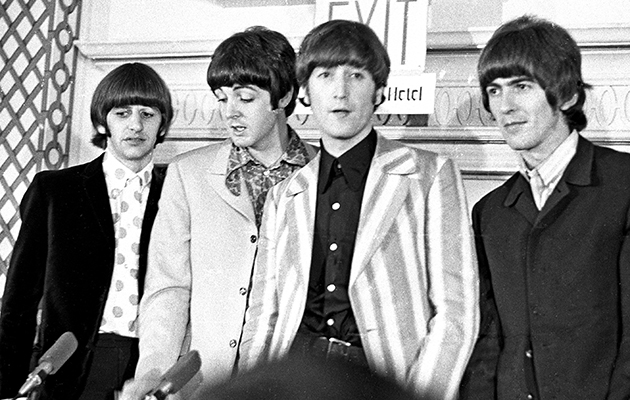 The Beatles’ minds are expanding, as work progresses on the next LP – ‘Magic Circles’? ‘Beatles On Safari’? ‘Revolver’? – and Paul immerses himself in Stockhausen and the Tibetan Book Of The Dead. First, though, there’s a return to Hamburg, and an emotional reunion with Astrid Kirchherr…

John Lennon and I tried something unusual last week – we went to lunch. Unusual for him because he never lunches out and unusual for me because I normally eat before 3.30pm! But then journalists have to get up earlier than Beatles do.

John arrived (on time) to test the new experience and we moved away in style in the luxury of his Rolls-Royce Phantom V, surveying Mayfair from behind darkened windows that allow you to see out but no-one to see in. It’s something like travelling in an ambulance, but ambulances are rarely fitted with a TV and fridge! The phone in the back of the car hummed: “Can’t be for me,” said John, “no-one’s got the number.”

We arrived at the restaurant in Regent Street and John sent the car away, asking the driver to return in 90 minutes. Only when it had gone did we discover that the restaurant, where our table was booked for 3.15, closes at 3… “Ere, it’s John Lennon,” said a woman to her friend, but before her friend had turned round we were in the back of a taxi. The driver said he knew a nice little caff in Soho, and that sounded better than sandwiches and tea at NEMS (the Epstein Emporium), so off we went. The place was empty and the food smelt good, though sherry in the soup was the closest we could get to alcohol at that time, much to the regret of our waiter. John removed his PVC mac (“Bought it in Tahiti for 15 bob”) and the Lennon interview began…

You have often said you don’t want to be playing in a pop group when you reach 30; you are now in your 26th year. The only firm date in The Beatles’ diary seems to be the NME Poll Winners Concert on May 1. Is this the start of the retirement process?
No, we’re going to Germany, America and Japan this year. It’s an accident that we’re not working now; we should have had two weeks’ holiday after Christmas and then started on the next film, but it isn’t ready. We want to work and we’ve got plenty to do, writing songs, taping things and so on. Paul and I ought to get down to writing some songs for the new LP next week. I hope he and Jane aren’t going away or God knows when we’ll be ready to record. George thought we’d written them and were all ready – that’s why he came dashing back from his honeymoon and we hadn’t got a thing ready. We’ll have to get started, there’s been too much messing round. But I feel we’ve only just finished Rubber Soul, then I realise we did it months ago. We’re obviously not going to work harder than we want to now, but you get a bit fed up of doing nothing.

Now that you’ve got all the money you need and plenty of time on your hands, don’t you ever get the urge to do something different?
I’ve had one or two things up my sleeve, I was going to make recordings of some of my poetry. But I’m not high-powered. I just sort of stand there and let things happen to me. I should have finished a new book – it’s supposed to be out this month but I’ve only done one page! I thought, ‘Why should I break me back getting books out like records?’

Do you ever worry that the money you have won’t be enough to last your lifetime?
Yes! I get fits of worrying about that. I get visions of being one of those fools who do it all in by the time they’re 30. Then I imagine writing a series for The People saying “I was going to spend, spend, spend…” I thought about this a while back, so I put the Ferrari and the Mini up for sale. Then one of the accountants said I was all right, so I got the cars back. It’s the old story of never knowing how much money we’ve got. I’ve tried to find out, but with income tax to be deducted and the money coming in from all over the place, the sums get too complicated for me, I can’t even do my times table. If I’m spending £10,000 I say to myself: “You’ve had to earn £30,000 before tax to get that.”

What sort of people are your guests at home in Weybridge?
We entertain very few. Proby was there one night, Martin another, those are the only two we’ve specifically said, ‘Come to dinner’ to and made preparations. Normally I like people to drop round on the off chance. It cuts out all that formal entertaining business. We’ve just had Ivan and Jean down for a weekend – old friends from Liverpool – and Pete Short, the fellow who runs my supermarket, came round on Saturday.

Is the Weybridge house a permanent home?
No, it’s not. I’m dying to move into town but I’m waiting to see how Paul gets on when he goes into his townhouse. If he gets by all right, then I’ll sell the place at Weybridge. I was thinking the other night, though, it might not be easy to find a buyer. How do you sell somebody a pink, green and purple house? We’ve had purple velvet put up on the dining room walls – it sets off the old, scrubbed table we eat on. Then there’s the “funny” room upstairs. I painted that all colours, changing from one to another as I emptied each can of paint. And there’s the plants in the bath… I suppose I could have a flat in town but I don’t want to spend another £20,000 just to have somewhere to stay overnight when I’ve had too much bevvy to drive home.

What kind of TV programmes do you watch?
The Power Game is my favourite. I love that. And next to it Danger Man and The Rat Catchers – did you see that episode when that spy, the clever one, shot a nun by mistake? I love that and I was so glad it happened to the clever one.

What’s going to come out of the next recording sessions?
Literally, anything. Electronic music, jokes – the next LP is going to be very different. We wanted it so there was no space between the tracks – just continuous. But they wouldn’t wear it. Paul and I are very keen on this electronic music. You make it clinking glasses together or with bleeps from the radio, then you loop the tape to repeat the noises at intervals. Some people build up whole symphonies from it. It would have been better than the background music we had for the last film. All those silly bands. Never again!
CHRIS HUTCHINS