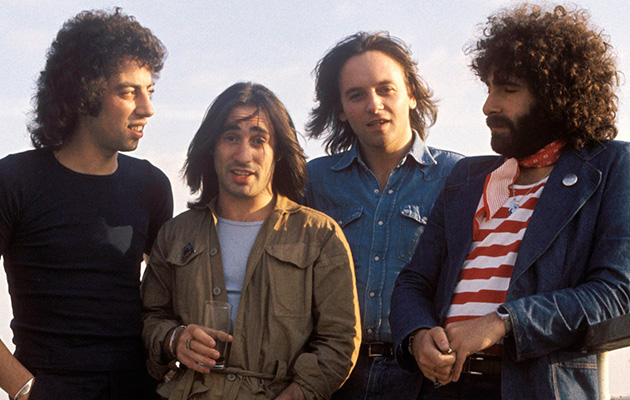 GOULDMAN: The next thing we put on was a piano, which had a sort of slightly strange sound on it, slightly chorused or phased. We used to do that quite a lot, put an unusual sound on, and that would influence all the other things that we put on after. On the surface of it, “Rubber Bullets” just sounds like a straight rock track, but there are other things in there. We’d usually try and put the bass on as late as possible. Yeah, very McCartney, and I understand why. He does it for the same reason. You know the sound you get then is pretty much gonna be as it is when it gets mixed, so you might EQ the bass differently at that later stage. I had a Mustang bass, and a Gibson SG that I used at that point, and Lol had a Gibson. Eric played the lead part on his Les Paul.

STEWART: On “Rubber Bullets”, I slowed down the tape and played the guitar solo again at normal key and then when the tape was sped back up I had duelling guitars there. Beautiful. One playing an octave higher and one playing the actual lead solo normal speed. I played straight through the Helios module. The first modules, if you turned up the mic amp to full it would go into the most beautiful distortion – a pure, smooth sound.

GODLEY: I think that guitar is actually the signature sound of the record.

GOULDMAN: On the opening riff, I’m playing bass through a wah-wah pedal. It was the sort of the thing we would do, just to not be the same as everybody else [laughs]… and it worked great.

STEWART: Our harmonies certainly on the choruses were very Beach Boys-influenced but the lyrics weren’t. And it got banned, initially, by the BBC. They banned it because they thought it was about Northern Ireland. It wasn’t, it was about the Attica prison riots in America.

GODLEY: This Irish journalist [ex NME writer] Sean O’Hagan, he told me an extraordinary story. When “Rubber Bullets” was released, he lived in Armagh, and one Saturday evening, there was a crowd of kids throwing stones at an army patrol – probably a couple of Land Rovers, and the kids started singing the chorus of “Rubber Bullets” at them, and dancing around and giving them V-signs, taunting them. Basically, the soldiers responded in kind when a brick almost downed one of them. So they started firing rubber bullets at these kids. And there was a lot of scrambling after them, as they were quite prized, apparently. They used to sell them to visiting journalists or put them on the mantelpiece at home. I don’t recall it being banned, but it probably had the adverse effect, as banned things often do.

STEWART: Fortunately, “Rubber Bullets” took off in the charts and suddenly they had to play it. We did a Top Of The Pops with, ahem, Jimmy Savile in Manchester, and it went straight to No 1.

GODLEY: Live, we extended it. That came from the idea that that’s kind of what you did when you played an encore. You just kept it going and made it as wild as possible. And that song seemed to lend itself to that approach. It was fun to do. A bit knackering, though, because it was quite a long song anyway, and it was very fast – thank goodness we had two drummers onstage [Paul Burgess joined the band live from 1974].

STEWART: It gave me a chance to have a little blast on the solos. Of course, I had to use effects pedals live. I remember we went to Manny’s in New York and I bought an XLR chorus pedal that they told me they’d just sold to Donald Fagen. I thought, ‘Oh God, I’ve gotta have one of those.’ “Rubber Bullets” opened up a lot of avenues for us, and by the time we got into [1974’s] Sheet Music we just exploded, experimentally. That, for me, is my favourite 10cc album.

GOULDMAN: We were already freed-up to do anything, we were free from the beginning. And so, we continued to be a band that sounded different on every record we ever made.

GODLEY: “Rubber Bullets” was our first biggie. I remember when we finished it, it felt special. Sometimes when you record songs, they can sound good, but they don’t always have that extra bit of fairy dust on them, but this was one of the ones that did. It was just kind of different to whatever else was out there. It had something… we all agreed on it. It wasn’t like, “Oh, it’s OK, it’s only a B-side, it’s not an album track.” We all felt it could go all the way. But it wasn’t the success factor so much as being able to deliver an interesting piece of music, and that’s what drove us. The lesson is, don’t copy anybody else, stick to what you do, and figure it out your own way.