The Rolling Stones at Glastonbury 2013 – review

It starts about two hours before The Rolling Stones come onstage - hordes of people, normally milling around merrily, are now purposefully heading towards the Pyramid Stage. By the time Mick, Keith, Charlie and Ronnie appear, the crowd has swelled to fill the entire field - backs to the food stalls and all. 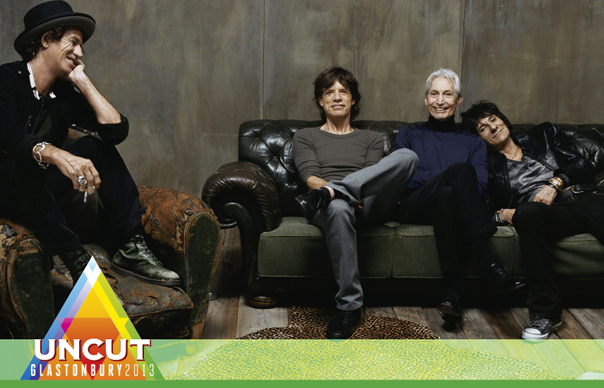 It starts about two hours before The Rolling Stones come onstage – hordes of people, normally milling around merrily, are now purposefully heading towards the Pyramid Stage. By the time Mick, Keith, Charlie and Ronnie appear, the crowd has swelled to fill the entire field – backs to the food stalls and all.

As the Stones launch into “Jumpin’ Jack Flash”, the response from the audience is huge, but swiftly followed by calls of “turn it up”: once again, the volume at a major gig is too low.

Luckily, the sound improves, though that isn’t the only surprise of the night – for their fifth song, the group debut an acoustic country-folk song, “Glastonbury Girl”, which Mick Jagger claims to have written last night after being inspired at the Shangri-La area (or being inspired after listening to “Factory Girl”, more like).

It features the immortal couplet “waiting for a girl/her wellies are bright green”, but thankfully is soon followed by an extended version of “Can’t You Hear Me Knocking”, featuring a velvet-jacketed Mick Taylor churning out some inspired guitar solos.

Taylor returns for an epic “Midnight Rambler”, alongside Bobby Keys, who plays on much of the set, including an energetic “Brown Sugar”. There is Keith’s customary solo slot too, with some tasty slide guitar from Ronnie Wood – “not too shabby,” says Keith. “Huh huh huh.”

During “Sympathy For The Devil”, flame spits from the roof of the stage as a giant mechanical bird unfurls – the Stones really don’t do things by halves. They leave the stage for a disconcertingly long time, before the London Youth Choir appear for the intro to “You Can’t Always Get What You Want”. “Satisfaction” ends the set, the slightly depleted audience going crazy for both the song and the fireworks that close the show.

Of course, there’s little danger in a Stones show nowadays – they’re consummate professionals after all, and some of their arrangements are disappointingly polite – which seems a strange fit with Glastonbury’s more ragged, relaxed atmosphere, and like most 135-minute sets we could have done without a few songs (for me, “Doom And Gloom” and “Miss You”), but the sheer weight of their near-peerless back catalogue makes the gig a success – with Mick Taylor’s guest appearances a real highlight for fans.

“After all these years they’ve finally got around to asking us,” crows Jagger early on in the set. “Thank you, Michael.”

Jumpin’ Jack Flash
It’s Only Rock’n’Roll (But I Like It)
Paint It, Black
Gimme Shelter
Glastonbury Girl
Wild Horses
Doom And Gloom
Can’t You Hear Me Knocking
Honky Tonk Women
You Got The Silver
Happy
Miss You
Midnight Rambler
2000 Light Years From Home
Sympathy For The Devil
Start Me Up
Tumbling Dice
Brown Sugar
You Can’t Always Get What You Want
(I Can’t Get No) Satisfaction