Features crucified scarecrows, a woman with a tail and a dead astronaut 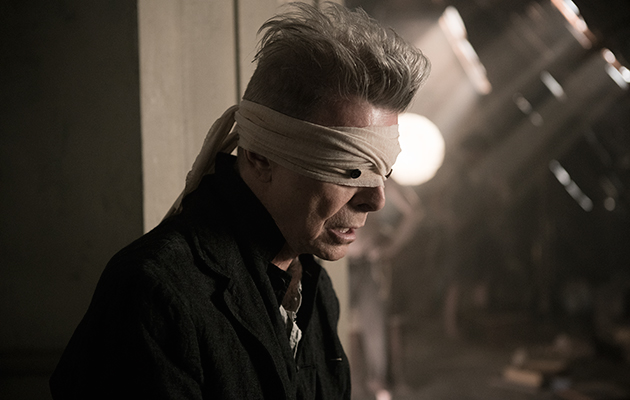 Watching David Bowie’s new single “★” make its debut last night on Sky Atlantic, I was reminded of the last time a Bowie video premiered on television with such fanfare: “Jazzin’ For Blue Jean”. I can dimly recall sneaking down to the TV room at school to watch it – the BFI elves tell me this would have been at 11.20pm on September 28, 1984 – but all I can really remember is the scene at the beginning, with Bowie up a ladder in orange overalls. I certainly couldn’t have told you that Bowie’s backing band in video contain at least one future member of Right Said Fred.

At the time, “Jazzin’ For Blue Jean” was quite a pioneering conceit from Bowie and the film’s director, Julien Temple. By then, Bowie had already made considerable inroads into music video. Mick Rock’s early promos from the Seventies still have a terrific raw energy; alas, “Ashes To Ashes”, with Bowie cavorting around Hastings beach with a bulldozer and Steve Strange in tow, holds up less well today. But in the context of the early Eighties, with MTV only a few years old, “Jazzin’ For Blue Jean” felt like part of a process by which musicians were exploring the parameters of what the promo video could do – whether that be, for instance, Duran Duran’s expensive jaunts to Sri Lanka or Peter Gabriel’s stop-motion antics in “Sledgehammer”. But Johan Renck’s film for “★” arrives in a different time for music videos, and when Bowie’s status is arguably less allied to the mainstream than he was during the Eighties.

These thoughts intermittently popped into my head last night as I watched “★” – or “Blackstar”, if you say it aloud. As I’m sure you know, the track is Bowie’s first new music since his Record Store Day 10”, “Sue (Or In A Season Of Crime)”, and acts as a scene-setter for the ★ album. I don’t want to go too deeply into the album in this blog – you can read all about it in the new issue of Uncut – but I think the video for “★” offers plenty of insight into Bowie’s ongoing relationship with his responsibilities as an artist.

Scrolling through the comments on Bowie’s Facebook page, almost every thread contains some kind of entreaty for Bowie to play live. But in the absence of a tour – which, we are repeatedly told, won’t happen – Bowie is exploring other ways to present his work visually. During his decade away from music, he continued to act – most memorably introduced walking through an arc of electric current in Christopher Nolan’s The Prestige – and the slew of promos he released around The Next Day also allowed Bowie to indulge his thespish tendencies: as a mournful ‘face in a hole’ puppet in “Where Are We Now” or as a suburban husband in “The Stars (Are Out Tonight)”. Even the relatively straight-forward “Valentine’s Day”, where Bowie mostly just sat on a stool in an abandoned grain silo and strummed a guitar, had a strangely mannered and artificial quality about it.

Renck’s video for “★” finds Bowie playing three different characters – a blind seer, a trickster lurking in an attic and a priest out in the fields. Along the way, we meet crucified scarecrows, a woman with a tail and a dead astronaut. It is thin on conventional narrative, but rich with imagery. Does the dead astronaut signify the final fate of Major Tom? Is the smiley face badge on his space suit deliberately intended to reference GERTY in Duncan Jones’ film, Moon? Bowie’s blind seer recalls Tiresias from Greek mythology, or perhaps Gloucester in King Lear; less ostentatiously, perhaps, it made me think of the button-eyed Other Mother in Neil Gaiman’s book, Coraline. The religious imagery provided by the priest and crucified scarecrows calls to mind the depiction of Catholicism in “The Next Day” clip; the jeweled skull of the astronaut echoes similarly adorned skeletons of Christian martyrs.

There is a good interview on Vice with Renck this morning, where despite the “make of it whatever you want” caveat, he does offer some useful insight into the video – who knew the weird shuddering movements made by the other characters was inspired by Popeye cartoons?

It’s a rich, strange, possibly entirely pretentious project. But let’s talk for a while about the song itself. Renck has already used a snippet of it as the theme tune to his Sky TV series, The Last Panthers (Renck, incidentally, has also directed promos for New Order, Madonna and Suede, as well as episodes of Vikings and Breaking Bad). But now it’s possible to hear it in its full, 9’57 glory – 3 seconds shorter than the maximum duration iTunes allow for a single. “★” arrives on a warm ambient sound bed comprising strings, skittering beats and tiny shoals of synth pulses. Then Bowie at his most mannered intones: “In the villa of Ormen / Stands a solitary candle / At the centre of it all / Your eyes”. There is talk of “the day of execution”. It feels like a continuation of The Next Day’s Scott Walker-esque closer, “Heat”, married to the electronic textures of Outside. But at the 3’56 mark, the song drifts off in another, warmer director. Suddenly, Bowie is singing in his best 70s soul voice, supported by low, woozy sax rolls that recall “Sweet Thing/Candidate”, while a call-and-response passage, with Bowie pitted against his own heavily treated voice, twists the song in yet another direction.

You can read more – plenty more – about the making of Bowie’s ★ album in the next issue of Uncut, which goes on sale next Tuesday. In the meantime, this new video is at the very least the perfect taster for a new intriguing chapter in Bowie’s remarkable career.